Do you sometimes find it particularly difficult to explain what you or your organization does in a concise and compelling way? Well then, you must take 15 minutes out of your day to meet Andy Goodman, Director of The Goodman Center.

The Goodman Center was launched in 1998 as a goodman, a one-person company with a singular mission: to help good causes reach more people with more impact. Over time, they became known for their workshops in storytelling, presenting, strategic communications and more.

Andy’s inspiring and humanistic methodology has influenced the narrative of well-known organizations like the Bill and Melinda Gates Foundation, the American Heart Association, the World Wildlife Fund, and corporations like Bank of America, General Electric, and Intel.

I had the privilege of attending two of Andy’s workshops and The Webinar on Webinars. And, wow. Sure, I have self-published stories and given literally hundreds of public lectures. However, the way Andy broke down the structure of stories completely changed how I approach telling a story. Now, his methods are transforming the culture of the company with which I work. We have committed to training 100% of our staff on how to tell stories that will impact our community and effect positive change.

With that background, I met with Andy. I wanted more insight on the power of storytelling:

Michael: Andy, since starting at The Goodman Center, what do you feel has been your greatest success?

Andy: I started focusing on storytelling back in 2001 and, at that time, the organizations that I was working with (primarily nonprofits, foundations, and government agencies) were actually pretty wary of this subject. They thought that storytelling was “soft” — especially compared to data — and they didn’t consider it an essential tool for their communications toolbox. Since then, I have conducted over 500 storytelling workshops, and attitudes in the public interest sector have clearly changed. Instead of asking “Why should we bother with storytelling?” organizations are asking me how they can use it to power up everything that they do. I would never claim sole responsibility for this attitudinal shift, but I believe I have contributed to it, and that’s what I’m most proud of in my work to date.

Michael: Having attended your sessions, I found your ability to break down the structure of a story to reach the heart of the listener simply amazing. Since humans are natural storytellers, why do you think companies generally focus on data metrics instead of people?

Andy: I have to answer this question by referring you to a great book I read a couple of months ago. It’s called “Numbers and Nerves,” and it’s a collection of essays assembled by the father-son team of Paul and Scott Slovic. The essays talk about the fact that human beings have an innate desire to quantify things, so we’re inherently drawn to numbers. At the same time, however, numbers do not move us emotionally. For that, you need stories. Companies are simply collections of people, so it makes sense that companies are drawn to data — and don’t get me wrong: data has it’s place. But when it comes to moving human beings to action, stories will always be more powerful, and I think we’re seeing more and more companies come to that conclusion. Just look at the advertisements you see on television. 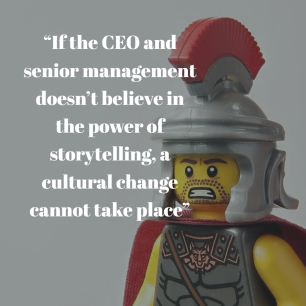 Michael: That is true. I have seen it firsthand where a non-profit is spitting out statistics to little or no effect. On the contrary, a person who benefited from the actions of the non-profit gets up in front of an audience, tells their true story, and impacts the audience in a way data never could. Seeing how important this is, what would be one simple step companies could take if they want to launch their storytelling culture?

Andy: I’ve been studying organizations that have consciously become storytelling cultures, and I see at least 6 steps along the path, but the first one is the same for everybody: there has to be buy-in at the very top. If the CEO and senior management doesn’t believe in the power of storytelling, a cultural change cannot take place. If you can convince the leadership that stories are their single most valuable tool, and if they model that belief in their own behavior day in and day out, then you have a condition in which a storytelling culture can start to spread and flourish throughout the entire organization.

Michael: The method that I write about encourages people to take a minimum of 15 minutes per day to for personal and professional improvement. Assuming a person has taken your course on storytelling, what would you advise a person to do 15 minutes per day, at minimum, to become a better storyteller?

Andy:  If you’ve taken my course, you know that a story must have certain essential elements: 1. It has to be about at least one person, 2. that person has to want something, 3. they have to run into obstacles along the way (to make the pursuit interesting), and 4. there has to be a clear resolution (did they get it? did they not get it?) that has meaning for the person and for the story’s audience.

Given those rules, use your daily 15 minutes to ask yourself: In the last 24 hours, have I seen at least one sequence of events that meets the requirements of “story”? It could be a TV show you watched, a commercial you saw, an incident at the office — just about anything. But all the elements must be present. I’m guessing that the average person would have several stories to choose from in a typical 24-hour period. Keeping your antenna up and writing down at least one story a day is a good way to reinforce your understanding of this powerful form of communication.

After having added Andy to my professional network, I can say that any company that does not have a storytelling culture is doing a severe disservice to its mission.

The Goodman Center’s engaging and humorous workshops range from training organizations on the 6 stories every non-profit should tell, unlocking the power of narratives, and improving business skills ranging from presentations to meetings.

If you are the leader of a large company, it is worthwhile to have a customized workshop, as my employer had done.

Even if you are a one-person show, storytelling will improve the way you communicate, motivate and inspire those with whom you come in contact. As I wrote in a previous blog, you should have your own personal mission. It will help you reach the heart of your listener and become an unforgettable fixture in their minds.

(For more on my personal heroes, productivity tips, and articles on leadership visit 15 Minutes Per Day.)

I am an instructional designer and master trainer with a focus in gamification. I am the writer of Gamemasters Comics [https://www.comixology.com/Gamemasters-1/digital-comic/183382] and an avid GM for over 30 years. (I started as an infant.) I currently am a writer for Marvel Plot Points, Continuing Missions, and if the universe goes right, the Fantastic Four movie reboot. (Last part's a joke, though, I wish it wasn't.) View all posts by Michael Dismuke

Find Success in 15 Minutes Per Day

I promote the 15 Minutes Per Day method to get things done. Discover the joy of daily achievement that can lead to long-term success!